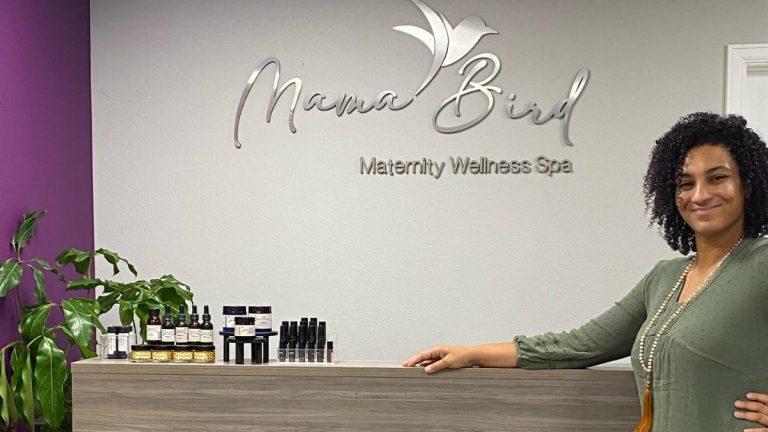 AURORA, Colo. — For the first several years Birdie Johnson worked as a doula, she worked with an agency that had a thorough resource system: they had a lactation person on call, yoga classes and massage services that she could easily refer people to.

But Johnson said that she did not serve a single family of color for those first several years. And when she started taking her own private clients, she found that she didn’t have a similar resource system for families of color.

“When I had families of color, they wanted lactation specialists of color. I had none,” Johnson said.

And when she had her three children of her own, she was never offered the kinds of resources that she later found so readily available at the agency she worked for.

Seeing the healthcare disparities for people of color, Johnson decided to find such resources and began networking with any person of color that worked in maternal health. 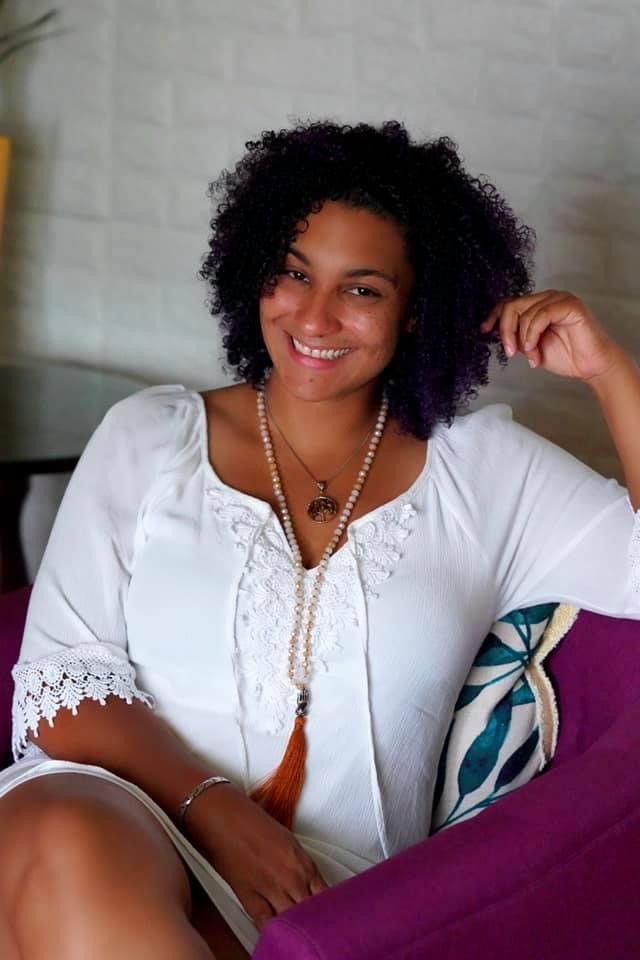 As a result, she opened Mama Bird Maternity Wellness Spa, which offers a variety of services to provide health, wellness and self-care resources to empower pregnant people of color. The maternity wellness spa also works with a midwife — one of the only Black midwives in the Denver area.

“There’s no place like this for women of color in Colorado,” Johnson said. “We advertise as maternity, but we’re really for all women. We just like to catch them at maternity to help them build self-care routines and build good habits and let them know about these things.”

Johnson is also part of the Sacred Seeds Black Doula Collective of Colorado, a networking space and landing place for Black doulas to receive support and representation. The program is run by Soul 2 Soul Sisters, a Black womxn-led, faith-based, racial justice nonprofit organization.

Briana Simmons, the doula collective manager for the program, emphasized that doulas are not medical professionals. They work to provide emotional, mental, spiritual and educational support to birthing people.

Providing support for doulas and birthing individuals alike
According to Simmons, a common fear among Black birthing people is the fear of death and of something tragic happening to either themselves or their child.

The Centers for Disease Control and Prevention data show Black women are two to three times more likely to die from pregnancy-related causes than white women for a number of reasons including quality healthcare, underlying chronic conditions, structural racism and implicit bias. As important as it is to address this disparity, Simmons said that the statistic is so widely talked about, it can cause stress and fear.

“When you hear that over and over again, as someone who is trying to bring life into the world, of course it creates fear,” Simmons explained. “One thing that we try to do to combat that on the psyche level is to celebrate Black birth.”

Simmons emphasized that doulas of the Sacred Seeds Black Doula Collective of Colorado try to uplift birthing individuals and ensure that there are social support systems in place so that those individuals can parent their families in ways that allow them to thrive.

A topic Simmons believes is not talked about as much as maternal and infant mortality rates is the rate of morbidity, such as near-death experiences, obstetric violence and birth trauma.

“Those types of things aren’t talked about as much, but they happen as much,” Simmons said. “There’s an obvious misalignment with the training of folks who are in these professional settings, as well as how they are approaching birth and then how folks are receiving it.”

The reason Johnson is so passionate about improving maternal health for people of color is because she has experienced birth trauma herself.

After becoming a doula, Johnson realized that she had given birth when she was 17 years old. At the time, the doctor had told her that she had a miscarriage. But Johnson remembers the doctor taking the baby right after birth, then coming back and telling her that they needed to talk about birth control with the coldest bedside manner she had ever experienced.

“I never saw my baby. I never knew what was wrong. Nothing was ever done for me,” Johnson said. “I went home the same day after giving birth because they were considering it a miscarriage, which it wasn’t. It was a viable 22 to 24-week-old baby.”

Johnson emphasized that processing birth is an important part of postpartum care.

“You have to process your birth. You have to think about what happened and process the whole experience, and a lot of women don’t have that chance,” Johnson said.

According to Johnson, doulas at Mama Bird Maternity Wellness Spa often use their first visit after a baby is born to help their clients process birth by listening to them talk about their experiences and validating their feelings.

Johnson added that many people believe that being a doula is a hobby rather than a career — especially for people of color. And because it is considered a hobby, Johnson said, many people also believe that doulas shouldn’t be paid for their work.

“It is actual labor supporting families in childbirth, in postpartum or for the women who are looking for that support system,” Johnson said.

In a Colorado Sun op-ed, State Senator Janet Buckner, a democrat out of Arapahoe County, wrote, “This package of bills paves the way to undoing inequities for our families experiencing the highest rates of mistreatment and infant and maternal mortality, and uplifts solutions that are driven by communities most impacted.”

Part of the package requires hospitals to now allow a doula to assist a pregnant person during labor, in addition to a partner or spouse. 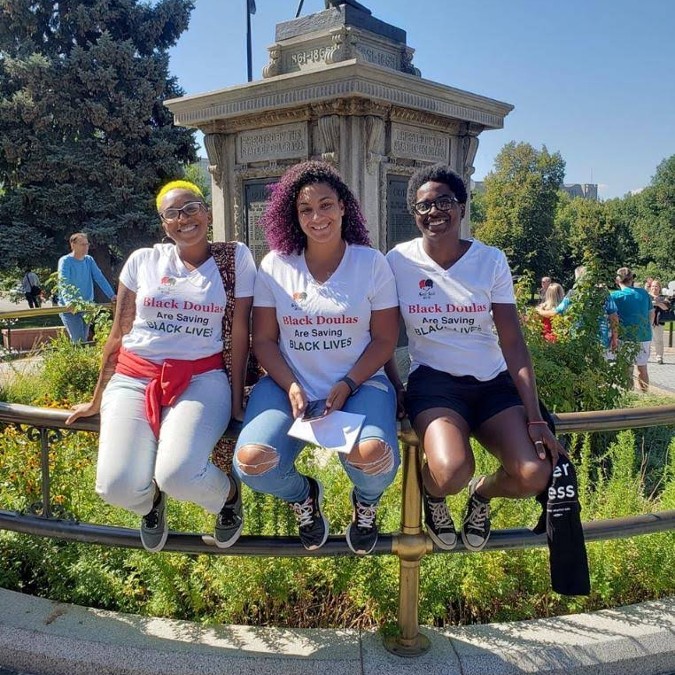 Simmons told Rocky Mountain PBS that she believes it is important for everyone on the birthing team, such as doctors, doulas, and midwives, to be in conversation and be reassured that they all have the same objective: to make sure that the individual has a healthy pregnancy and healthy birth experience.

According to Simmons, there typically aren’t a lot of opportunities to receive more training after receiving certification. Training can also be expensive and create barriers to access for Black doulas.

“That looks like funding and partnering with different organizations to make sure that those trainings themselves are reflective of the communities we’re working with,” Simmons said.

She is particularly excited about doulas receiving maternal mental health training so they can identify perinatal mood disorders in their clients and refer them to appropriate resources. Another training in the works is a class for doulas to receive a master class on the business side of doula work so that they are equipped to build their own businesses.

Needing someone to ask the right questions 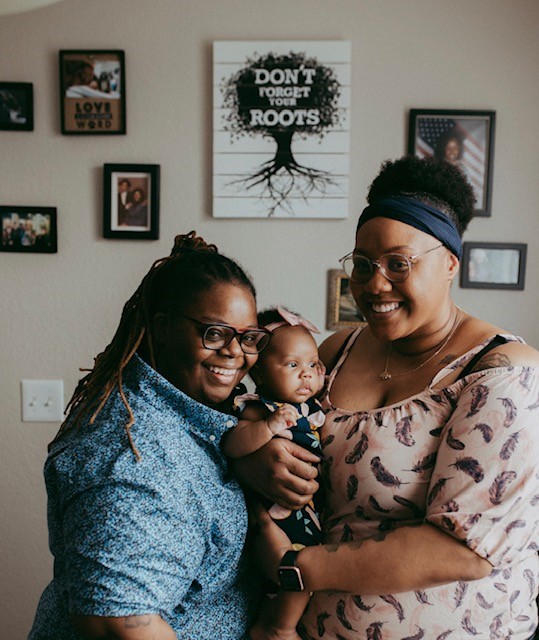 Shaunette Winters was nervous during her first pregnancy in 2020. She said that she and her wife, Qi-Ante, didn’t know what to expect or what things to look out for when it came to the birthing process, so they reached out to Simmons.

“I really wanted to make sure that I had someone that was asking the right questions … someone that had our best interest in mind and not just kind of going with the status quo in the medical world when it comes to birthing, especially as a Black woman in the medical field,” Winters said.

Simmons helped Winters build a birth plan. They discussed different birthing options, such as having no medication intervention versus medication, C-sections and different induction techniques.

For Winters, the information Simmons provided was impartial.

“It was like: here’s all the information that there is about birth and labor and what your options are as a birthing person,” Winters said.

According to Winters, Simmons helped her feel more at ease because she was more knowledgeable about her choices. In the end, Winters scheduled an induction.

Because of COVID-19, Simmons was not able to be in the room during delivery as planned, but Winters and her wife were in constant communication with Simmons throughout the process.

One of Winters’ favorite aspects about working with Simmons is that her doula always made sure to create a calming space and do a grounding exercise during home visits. The first time Simmons visited, she had a basket with resources and journals for Winters as well as some books for Winters’ wife. She also provided Palo Santo sticks to cleanse the space before each meeting.

There were also frequent phone check-ins, and after the Winters’ daughter, Isabella, was born, Simmons texted Winters frequently to see how she and the baby were doing.

Winters said that she and her wife would work with a doula again if they decided to have another baby.

“I think that it’s really valuable to have someone that can just kind of guide you and help to advocate for you and think about your well being,” said Winters, “more so than just what’s happening in a biological sense.”